We remodeled part of our attic space adding a shed dormer to increase the usable area in terms of ceiling height.  SC&C did the demolition, framing, rough and finish electrical work, and finish carpentry including window install and exterior siding.  In other words SC&C did all the work for this job except for the metal roofing, since it was a very new roof and still partially under warranty from the initial install.  SC&C did a particularly good job at keeping to a very short (less than 3 week) construction schedule. All around fantastic job! 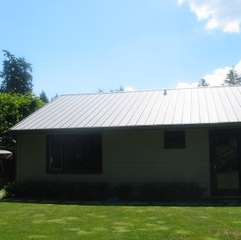 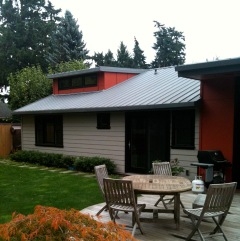 Our first meeting with Tom went great. He was the last contractor we sat down with before we made our final choice for our kitchen remodel, and my wife and I couldn’t have been happier with our decision. We immediately felt confident that he was not only going to be able to deliver us our dream kitchen, but also to stay on course with our budget. He not only kept us on budget, but his time frame for the job and his craftsmanship were all exceptional as well. Having pets in the house, he was also extremely clean and attentive to making sure their well being was always a priority.

Tom helped us completely change the look and feel of our kitchen. He far exceeded our expectations with both his attention to details and the overall finished product. We wouldn’t hesitate to enlist his work again, and we would highly recommend him to anyone who would be looking for a home remodel. 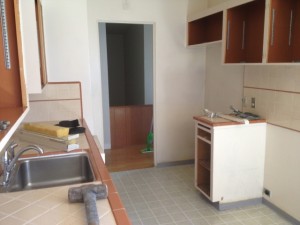 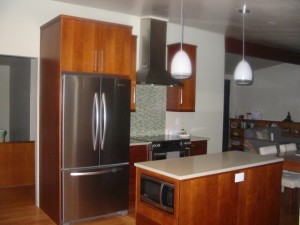 This was a total bathroom remodel, a total transformation which involved removing an ancient tub with shower enclosure and replacing it with a state of art walk-in shower with a rain shower head as well hand held shower head. Tom P. designed the layout of this small room and created a much more workable space! When unexpected issues came up (who would have thought there was almost no wall insulation), he handled them quickly, efficiently and cheerfully. Plumbing, electrical, flooring & wall replacement-no worries. He had great design ideas and suggestions for where to look for lighting, tiles, fixtures, everything I needed. He is truly a craftsman. The work was performed artistically-painting, tiling, adding a wall where there was none before, removing built-in cabinetry that was no longer attractive. Tom P is a meticulous worker. I could not be more pleased with the work performed by Sustainable Construction & Consulting. I had waited a very long time before starting this project, and it became very clear to me that I had not approached this endeavor until I found someone who could perform this job to my expectations. 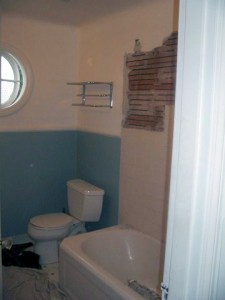 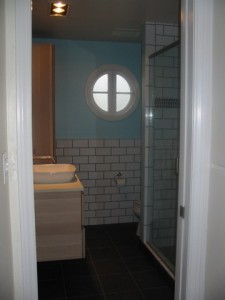 Tom remodeled an old bathroom, replacing the tub which was really challenging. He also dealt with a water problem behind tile that was complicated and a bit of a surprise. Then there was the usual, sink, faucets, cabinets, mirror, lighting, etc. He personally did all of that. He did bring someone in to install the counter top.

The cabinets presented a problem which he presented to me, describing the 3 different ways he could deal with it. There were no surprise costs, as we discussed all decisions based on what I was willing to pay for it. Also, he directed me to products which were good value for the money. He knew the place to get green materials, as well.

Tom is unflappable, undertaking each problem as it arose, many of them unexpected. He shows up when he says he will and stays at it until the job is done! He is nice to have around, considerate and careful!
He works alone which can mean projects can take a bit of time, but that was okay by me as I really like knowing who is in my house and doing the work.

Tom helped us select and install new windows for our home that not only matched the period detail we wanted to retain, but also the energy efficiency we desperately needed in our 86 year old home.

Sustainable Construction replaced 10 windows for us and did a beautiful job, selecting a local window manufacturer for the product, arranging delivery and then completing the tear-out and installation plus painting, sealing and all of the details needed after the windows were in place. A detailed contract was provided up front including time and cost estimates, and was adhered to exactly. We are very happy with the approach Tom took to thoughtfully consider the type of windows that would be best for our home, and the attention to detail in the installation.

We’ve used Sustainable Construction & Consulting for two jobs this past year (2012). In February, Tom remodeled our upstairs bathroom and in February, he installed a new front exterior door. The workmanship was first class on both jobs and it was a pleasure to work with Tom in every aspect.

Our old bathroom was really awful! The fixtures were nearly non-operational and the walls, floor and trim were worn and damaged. Tom fixed everything: new toilet, sink, medicine cabinets, tile floor and shower. It was a difficult area to work in, too, since it was small (the house was originally built in 1925) and featured a severely slanted ceiling line. He did an especially nice job of furring in the shower stall to the sloping ceiling. Check out keno http://mapleleafonlinecasino.com/keno/ in Canada! We really appreciated his flexibility in accommodating our daily schedules. Just last week (November) , Tom installed a new front door for us in less than a day. It was another tough job on account of the ancient door trim he had to work with. He did a great job again.
We highly recommend Sustainable Construction and Consulting.

We hired Tom about two years ago to tile our bathroom floor, and again last May to do a reconstruction/modification of our front porch and steps to restore our 1901 Craftsman to its original look. We plan to have Tom do a kitchen remodel in a few years as well.

Tom took the time to listen to what we wanted, was both responsive to our suggestions and forthcoming with ways we could save money without compromising the quality. When we ran into some unexpected rot underneath our steps, Tom worked with us to provide options. We had previously obtained an estimate for this work from another company about six years ago; Tom’s price, even with a few last-minute modificiations, was well below what we’d previously been quoted. People walking down our street have on a few separate occasions stopped by to tell us how much they like what we’ve done, and we’ve referred Tom to one of those couples already. We’ve referred him out to other friends as well and have received glowing reports. Tom is our go-to guy for any home improvement projects.

Testimonial
"Tom is unflappable, undertaking each problem as it arose, many of them unexpected. He shows up when he says he will and stays at it until the job is done! He is nice to have around, considerate and careful!"

"We wouldn't hesitate to enlist his work again, and we would highly recommend him to anyone who would be looking for a home remodel."

"Tom helped us select and install new windows for our home that not only matched the period detail we wanted to retain, but also the energy efficiency we desperately needed in our 86 year old home."

"The work was performed artistically-painting, tiling, adding a wall where there was none before, removing built-in cabinetry that was no longer attractive. Tom P is a meticulous worker. I could not be more pleased with the work performed by Sustainable Construction & Consulting."

Sustainable development refers to a mode of human development in which resource use aims to meet human needs while ensuring the sustainability of natural systems and the environment, so that these needs can be met not only in the present, but also for generations to come.